Zarélsie was born and raised on a farm in South Africa. She studied psychology and computer programming in South Africa and spent ten years working for the South African Police, before immigrating to New Zealand with her family in 2002 to pursue a better life.

Shortly after my immigration to New Zealand, she wrote her first book–Running from the Rainbow Nation -available on Amazon (link).

In New Zealand she worked for the New Zealand Police for ten years and spent a number of years working in the private sector.

After immigration to New Zealand she started helping other immigrants, first on a part time basis and recently dedicating her full attention to her passion of inspiring and guiding immigrants globally.

Belief
People have moved around the face of the earth since human beings had the ability to walk upright.

They have taken their drive, ambition and determination with them to build better lives and improve the fate of mankind by moving to a place which could afford them that chance.

Zarelsie believes that immigrants are immeasurably valuable – not because of their skills, qualifications or experience which are sought after in their adoptive countries, but because of their make-up as people with grit, determination and a burning ambition; adaptive problem solvers who can turn a second chance at a better life into a prosperous expedition of growth, learning and wealth.

Immigrants created and built the greatest countries in the world. They have done so for thousands of years and when there are no boundaries on the face of the earth anymore to stop skillful, ambitious human beings to seek a better life beyond their own borders, then they will probably seek it on other planets.

Inspiring and Educating Immigrants
Zarelsie is known as the Migration Mentor and rather than speaking about immigrants, she speaks to immigrants.
She focuses on providing mentoring & guidance to new immigrants relating to finding jobs, dealing with the challenges and frustration of integrating into their new country.

As an immigrant herself she is fully aware of the stress and emotional turmoil moving to another country can cause and want to share her experience and knowledge with others to ensure they don’t make the same mistakes she did – ensuring their transition is smooth and less of an emotional rollercoaster which many experience.

Her focus is on a global audience and is not just confined to people migrating to New Zealand, where she now lives.

This book is for people who dream about securing a job as an immigrant in a different country and who are faced with the common obstacles which immigrants, looking for jobs in another country, whether form a distance or as a new arrival, often come up against,  and which almost always kill their immigration dreams due to the complexity and difficulty of the process. 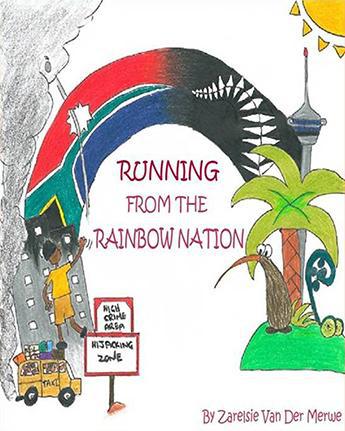 Running from the Rainbow Nation is the bitter sweet chain of events that eventually brought this family to a new country, and a new life. It describes their struggle to find a way out of South Africa while under stress, facing obstacles and meeting a range of “angels” – people appearing on their path to help them on their journey. It is a personal account of huge change in the life of one family, and the silent truths that lay on the heart of someone who has to face the heartache and rush of immigration – the most traumatic event in any human being’s life. But is it also a tale of hope and adaptation in a new country, blessed with wonderful people and a clean, safe environment. A great read for anyone who faces the same situation, anywhere in the world.